The Fire on the Mountain Cloggers feature traditional or freestyle clogging in addition to precision clog dance routines and old time buck dancing.  At almost every show we present our version of the history of American clogging, where we demonstrate the different 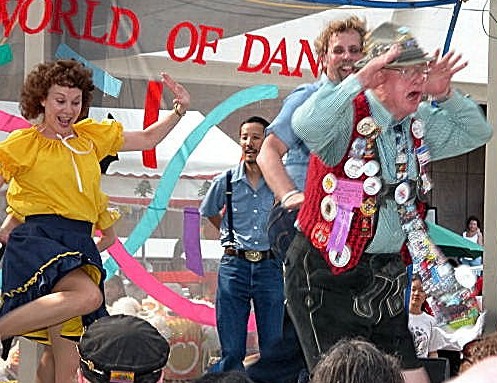 ethnic influences on this old time folk dance.  Included in our “History of Clogging” are Cherokee dance steps, the English Lancaster clog, and the German polka.  The German influence also includes a demonstration of the shuplatler.   Sometimes Professor Katzenjammer, emcee on one of the dance stages, gets in on the act.  We also feature an Irish segment we refer to as RiverClog.

Our Silent Routine, which displays various forms of clogging such as flat footing, precision clog dance, shuffling, buck dancing, and the dragging clog, is always a favorite and the steps really resonate on the wooden stages.  The pulsating taps create a staccato rhythm and the crowd often appears mesmerized.  The Texas Folklife Festival is an opportunity to shine.

Occasionally Fire on the Mountain Cloggers will perform in The Clearing.  This interactive venue at the Festival is often the site of audience participation type events including a watermelon seed spitting contest, trick roping, a contra dance workshop, a Hawaiian luau, and other exciting activities. Frequently our dancers will participate in learning the traditions of other cultures…a favorite Folklife pastime is attempting

to master the Filipino Folk Dancers’ art of tinikling.

Back to Main Page